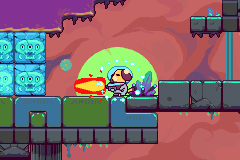 Goodboy Advance was the original jam version of Goodboy Galaxy, which Rik and I hacked together for Ludum Dare one weekend in December 2018.

It's not that good really... well it was kinda impressive at the time, but it's really missing enemies, characters, and story. If you're looking for a cool GBA homebrew game about a dog in space, you should definitely try Goodboy Galaxy: Chapter Zero instead.

However, if you'd like to know what we used to make the original jam game, and all the things we've learned since that allowed us to go on to make Goodboy Galaxy, then this is the page for you!

How we made it

The game was written in C using the devkitARM1 toolchain, with libraries provided by this excellent free book called Tonc which can teach you almost everything you need to know about GBA programming.

We used Maxmod for music/sfx playback. Music was composed in MilkyTracker and MadTracker. i.e. we have different weapons of choice, but it doesn't matter because both support the XM format which Maxmod can use.

Aseprite was used for graphics/animations (having to be mindful of size and palette restrictions etc.). To convert the graphics into the raw formats which can be used by the hardware, we used Grit which is powerful but quite difficult to work with because there are so many options and sometimes it's hard to tell which ones do what you want2.

And finally, we made the maps in Tiled, but it seemed like parsing XML or JSON in C on such limited hardware would be a terrible experience. So instead we made a Node.js script which goes over the Tiled data and generates C code for a given level. That may sound like a big hack but it was really a life saver!

The source code for the jam game can be found on GitHub. This code was born from the ashes of a Super Crate Box clone that I was working on many years ago.

Here are some things it does poorly, which we've fixed in Goodboy Galaxy and/or you may want to do differently if you're aiming to make something bigger than a jam game:

[1]
devkitARM can be installed from here but nowadays I'd recommend something like sdk-seven , gba-toolchain or gba-bootstrap
[2]
SuperFamiconv is often recommended as a more user-friendly and less buggy alternative to grit. I'd recommend trying that first.